As the fairgrounds in Billings, Montana, prepares to celebrate its 50th anniversary in 2025, a marketing campaign is highlighting the people and events that make MetraPark and its centerpiece arena special.

Featured in this campaign is First Interstate’s Kirk Hansen, regional facilities manager over Eastern Montana and Western South Dakota. In 1987, Hansen was the center on the Billings Senior High team that won the Class AA Boys Basketball Championship in the arena at MetraPark.

Hansen believes it is a “huge honor” to be featured as part of MetraPark’s history.

“It is just kind of a nice nod to us old guys,” Hansen said. “Once upon a time, we did something that was pretty cool.”

While the Broncs played most of their games at Senior High, the team played its biggest games, including intra-city match-ups and divisional and state tournaments, in the 12,000-seat arena at MetraPark. The boys considered it their home turf.

“We had 9,000 or 10,000 people cheering—the entire student body and parents and coaches and band members and the whole nine yards—after we won,” Hansen said. “That always sticks out in my memory as an amazing night that we were able to share with our school and the community.”

Not if, but when 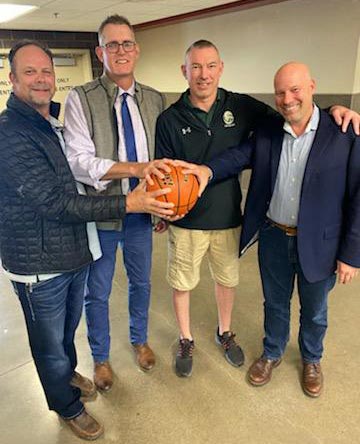 Going into the 1987 state tournament, Senior was the team to beat. In 1986, the team lost in the divisional tournament. In Hansen’s sophomore year, they took fifth and felt they should have done better. The Broncs had a monkey on their backs.

So, it was “almost a relief” when it was over and the Broncs were champions.

“We had known that was our goal the entire season. We had practiced for it, we had played our other games in preparation for it,” Hansen said. “It was almost a singular achievement that we talked about and thought about all season.”

In addition to the championship, the 1987 Broncs had seven All-Conference players. Five took All-State, and Hansen and one other teammate were named Montana All-Stars, as well as earning All-American titles – an honor reserved for the top 500 players in the country. “Eight played college basketball and three played professionally in some capacity,” Hansen said.

“What was incredible about that team was there was no selfish pride,” Hansen said. “Nobody walked out of the game going, ‘I didn’t get the ball enough’ or ‘I didn’t score enough.’ It was such a unique blend of attitudes and mentalities. It was such a fun group of guys to play with, and everyone just had the mindset that once this season’s over, we’re going to hoist that trophy.”

In June 2019, the arena at MetraPark was renamed First Interstate Arena as part of a sponsoring partnership. That’s how Hansen found himself on the roof of the arena more than 30 years after the tournament, dangling a First Interstate Bank logo over the edge, while PR/Communications Manager Brittany Cremer took photos from the ground.

Being part of renaming and rebranding First Interstate Arena brought back a lot of memories for Hansen.

“It was just a tremendous honor that I could go from all the years and experiences and great thoughts and memories that I had of the place to being part of representing First Interstate on the building,” he said. “I drive by it every single day, and it puts a smile on my face.”

He also sees parallels between now and then.

“It was great teamwork back then, and I’m part of a great team now at such a great company,” Hansen said. “I love working at First Interstate, and I love what I do for a living. To have some ties to the community where that stuff comes back to the old days is pretty special.”

After high school, Hansen went on to Sheridan College and Montana State University-Northern. He attended graduate school at the University of Regina in Saskatchewan, Canada, where he also played semi-professional basketball.

Hansen eventually returned to Billings, where he and one of his 1987 teammates, Charlie Loveridge, owned a property maintenance company for nearly 18 years before joining First Interstate in 2018. (His company held the contract to clean the arena at MetraPark.)

In May 2021, Hansen celebrated his daughter’s high school graduation at First Interstate Arena.

“It was just an incredible full circle of pride of what MetraPark meant to me growing up and what it means as an adult to be able to have our company’s name on the side of the building,” Hansen said.