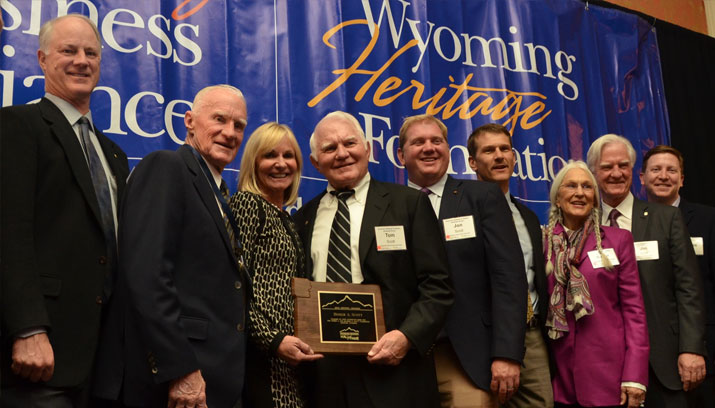 First Interstate Bank founder Homer Scott, Sr. was one of five business icons inducted into the inaugural class of the Wyoming Business Hall of Fame. Along with James Cash (JC) Penney, W. Edwards Deming, H.A. “Dave” True, and Clarene Law, Homer was recognized for his lifelong achievements in business at a gala event on November 19th in Cheyenne, Wyoming.

Homer was inducted posthumously as a “Historic Award” honoree, which honors the contributions of the generation that, between 1945 and 1985, established the economic base on which the state, country, and world continues to grow and prosper. “Dad would have been very proud to receive this award, although knowing him, he would have wondered whether or not he really deserved it,” said Homer “Scotty” Scott, Jr.

Raised in poverty in Nebraska, Homer began working for Peter Kiewit and Sons Construction Co. in 1931 and moved to Sheridan, Wyoming in 1937. “Dad had a tremendous work ethic,” Scotty explained. “Dad’s drive and hard work, combined with our mother’s sacrifices in those formative years, are the principal reasons we are now paying homage to his legacy.”

Fueled by his values of honesty, integrity, and love of family, Homer expanded the construction business across the region and the country while also branching into ranching and banking. “These values were instrumental in Dad’s innate ability to lead and motivate the successful organizations he founded,” Scotty said.

Homer purchased the Padlock Ranch near Dayton, Wyoming in 1943, building it into a major cow-calf operation that still runs today. In 1968, he established First Interstate Bank, which has grown from one branch in Sheridan to over 70 locations throughout Montana, Wyoming, and South Dakota.

According to Scotty, “Dad afforded us the opportunity to continue his vision of making a difference by giving back to all the people, the various operations, and the many communities that have been so supportive over these past years.”