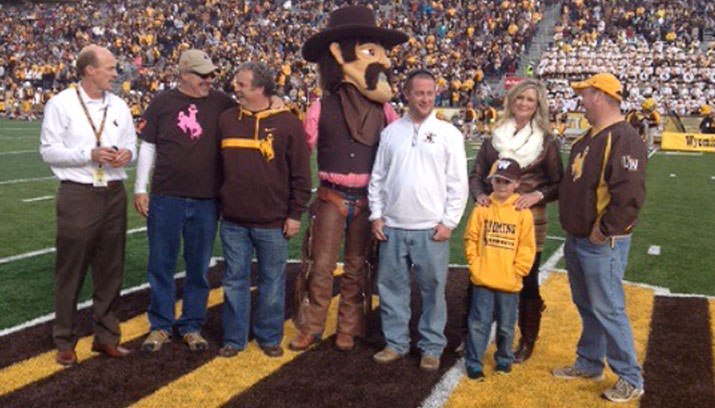 Sometimes winning can be its own reward. Drew Johnson, a commercial lender at the Laramie branch knows that better than some. Last July, Johnson and various co-workers participated in a golf tournament presented by the Cowboy Joe Club, a fundraising organization that supports student athletes attending the University of Wyoming. First Interstate Bank purchased raffle tickets and paid tournament entry fees for employees wishing to participate.

Gary Negich, President of the Laramie branch, received the call that Johnson’s ticket was drawn as the raffle winner. “I was in Casper when I was notified,” Negich said. Later, Negich and commercial loan manager Mike Peck called Johnson in to inform him that he’d won a brand new 2013 Chevrolet Silverado. The reaction? “There were high-fives all around. People were jumping up and down,” said Negich. And for good reason, too; Johnson was informed that the truck wasn’t just being leased to him, but that he fully owned it.

“To be honest, it was pretty surreal. You don’t just win a truck every day,” Johnson said. Negich was present to accept the truck during an on-field ceremony at halftime of one of the University of Wyoming’s home football games. It wasn’t just enough to win, though. Johnson decided to donate the truck to the United Way, to do with it as the organization sees fit.

“I told [Drew] he could easily sell it and make some money,” Negich said. “But he was adamant about giving it away.” Johnson was confident in his decision. “I just wanted to do the right thing. I already have a reliable truck and I thought someone else could use the money.” Currently a member on the board for the local Head Start, Johnson noted, “Recently there have been dramatic decreases in budgets for some Albany County organizations. I wanted to help out.”

The United Way held a meeting to announce the donation, and Negich was there to present the gift. “Everyone in the room was ecstatic,” Negich said. “They were so happy to see a young person give back to the local community so unselfishly.”

The United Way has yet to decide how the donation will be used. It could either be raffled off at a later function or they are able to sell it back to the dealership, which would grant the non-profit anywhere between $20,000-$30,000.