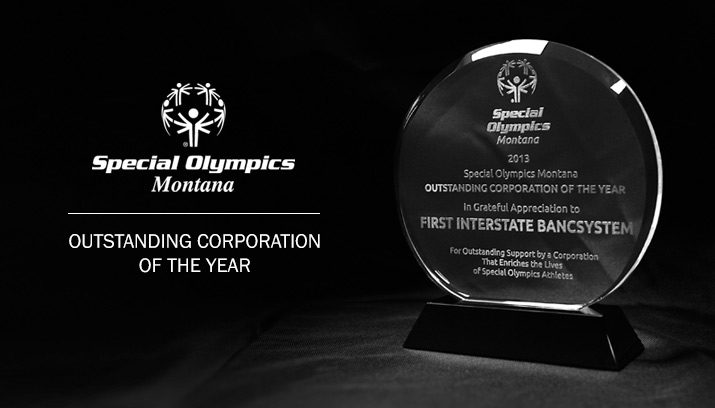 Distinguished Service Awards are the most prestigious awards given by SOMT. Nominations for the awards are received from SOMT volunteers, coaches, parents, and athletes. “We need good plans to service our mission,” Norbie explained. “But to fuel those plans, we need fans and funds; First Interstate understands and responds to these needs.”

First Interstate has been a major mission partner of SOMT for more than 20 years, providing financial support for corporate, individual, and local events. In addition, employees have volunteered thousands of hours to SOMT events throughout the state. “When we combine corporate sponsorships with local bank donations of employees’ time and money, First Interstate’s contributions easily exceed $310,000 annually,” Norbie said. “That’s about 15% of our annual operating budget.”

“First Interstate Bank and its employees are honored and humbled to receive this award from Special Olympics Montana,” said Ed Garding, First Interstate’s President and CEO. “The determination and discipline we observe in the athletes, their coaches, support teams, and families provide our employees with a large amount of inspiration and reward for the time, talent, and treasure they provide to Special Olympics’ events and programs.”