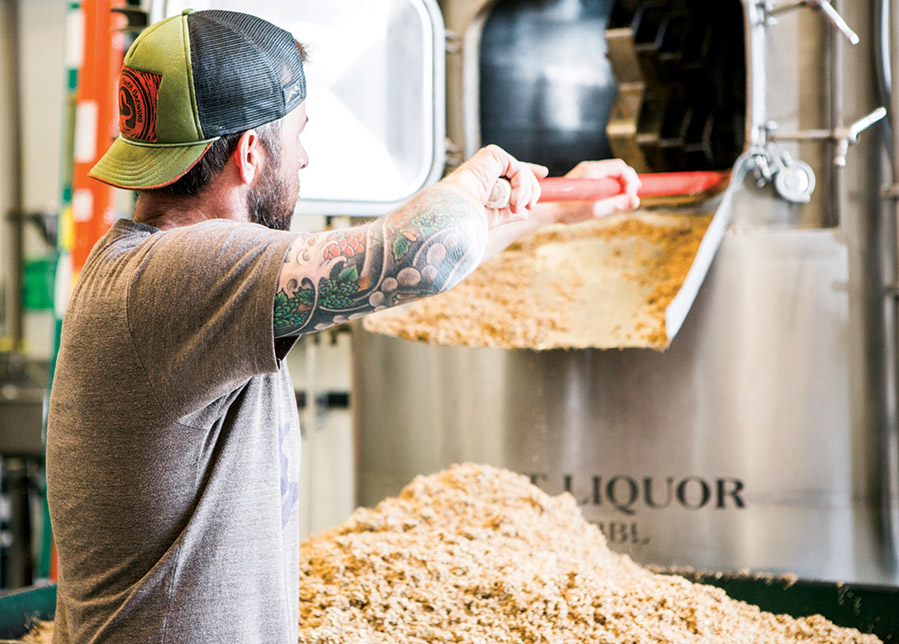 You won’t find many frills at the Blackfoot River Brewing Company taproom.

There are no TVs blaring football highlights. No waiters or waitresses showing off their flair. There’s not even a food menu.

The Blackfoot, as locals call it, traffics in simplicity: a beautiful wooden bar, 10 beers on tap regularly, and a din of chatter low enough to have a long conversation with an old buddy.

That was exactly the vision when founders Brian Smith, Brad Simshaw, and Greg Wermers opened the original brewery 20 years ago. They wanted the beer to taste good and the vibe to feel right. And that was it.

“It’s not like we sat down and made a five-year plan,” Simshaw says. “We don’t want to get bigger. We want to get better.” 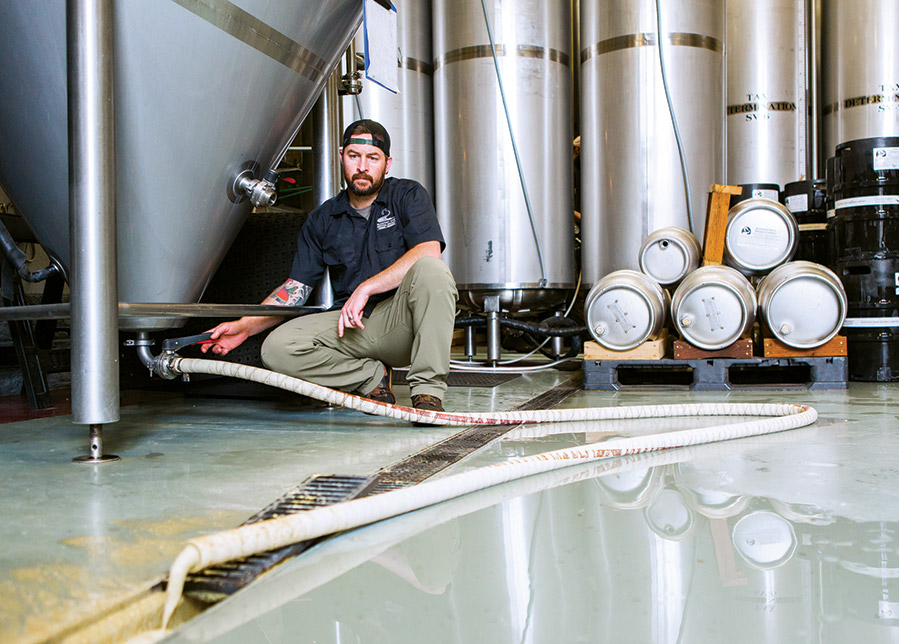 The brewery has grown slowly, moving across the alley into a bigger production space and distributing to Missoula, the Flathead Valley, Great Falls and, of course, Helena. It’s also brought in two new partners: Head Brewer Tim Chisman and Operations Manager Bethany Flint. But the brewery is at full capacity producing up to 3,600 barrels per year — and it doesn't care to add more. (By comparison, the more well-known Big Sky Brewing in Missoula brews between 40,000 and 47,000 barrels per year.)

This level of production gives the company — and its team — precisely what they’re looking for.

Blackfoot’s tanks are always full. According to Chisman, the brewery’s production level feels about right.

“I’ve never had a big desire to be part of something trying to go nationwide or global,” he says. “I like the small, craft-only beer not focused on bottling or canning, just making really good, traditional, and fun beers. That’s everything I look for and appreciate in breweries.”

The ethos of making good beer and being content with small-scale success was there from Blackfoot’s first days.

For the founders, that story started several years earlier. 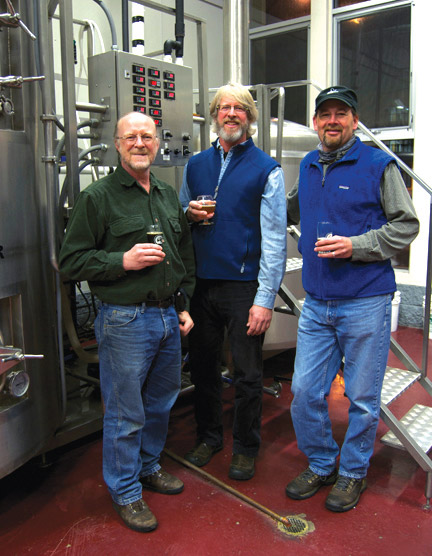 Simshaw and Smith worked together at the Montana Department of Revenue during the early 1990s, homebrewing in their spare time. As their know-how increased, the pair grew frustrated by the difficulty and expense of sourcing and buying ingredients. So in 1995, they opened a homebrew supply store.

They hoped to make some money, but more than that, Simshaw and Smith wanted access to wholesale ingredients for themselves and the rest of the growing number of homebrew locals.

Less than two years later — and after plenty of folks telling Simshaw and Smith that their beer was good enough to sell — they started taking the idea seriously. A third homebrewer, friend, and, yes, state employee, Greg Wermers cooked up a business plan, and the trio decided to give it a go.

They took out an $87,000 loan to get started from a bank that would later become First Interstate, which has serviced the loan and handled Blackfoot’s accounts ever since.

Wermers, Simshaw, and Smith pieced together mostly used brewing equipment while devoting all of their extra time to fixing up the brewery. It was a tall order, with Simshaw and Wermers working full time for the state and Smith working half time.

“That was the biggest challenge, working all of those evenings and weekends,” Simshaw says. “But the planning was solid. The confidence was there. We weren’t going to put out a product until it was good.” 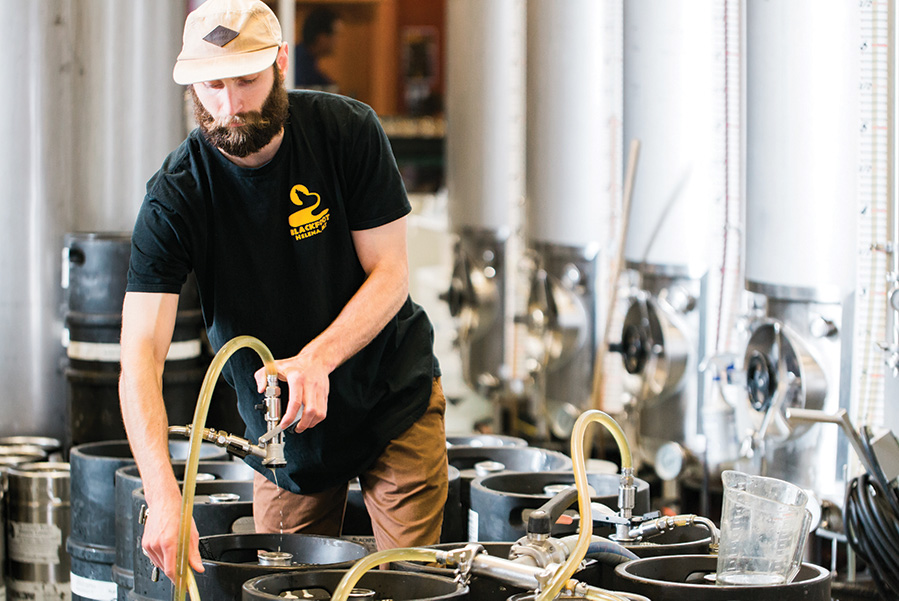 It’s All About the Beer

The Blackfoot was the second brewery in Helena when it opened in 1998. Its first beer was a pale ale, a precursor to the organic pale now among the brewery’s most popular.

The craft brew scene was different back then, both in Montana and across the nation. The number of breweries in Montana grew from around a dozen in 1998 to more than 70 today.

“When I got into this, most of the people I met didn’t have much of a grasp for how beer was made,” he says. “Now, customers know their beer styles. They know specific hops. They know yeast strains. They are so much better educated.”

Preferences have changed over the years, too. Strong IPAs in particular have come into vogue, with breweries seemingly in an arms race to brew the hoppiest and most bitter beers possible.

Years ago, Blackfoot’s Single Malt IPA became its flagship. But unlike the modern IPAs that smack drinkers across the face, Blackfoot’s IPA is a balanced beer that features the malt as much as the Simcoe and Cascade hops. It’s a quaffable beer with a color more golden than most IPAs. Breweries across the country are now swinging back to balanced beers, Flint says, but Blackfoot won’t change their recipe because their brewers didn’t follow the trend in the first place.

“I see a shift in the country getting away from those overly bitter, insanely hoppy IPAs to much more pleasant IPAs,” Flint says. “That’s what the Single Malt IPA has always been.” 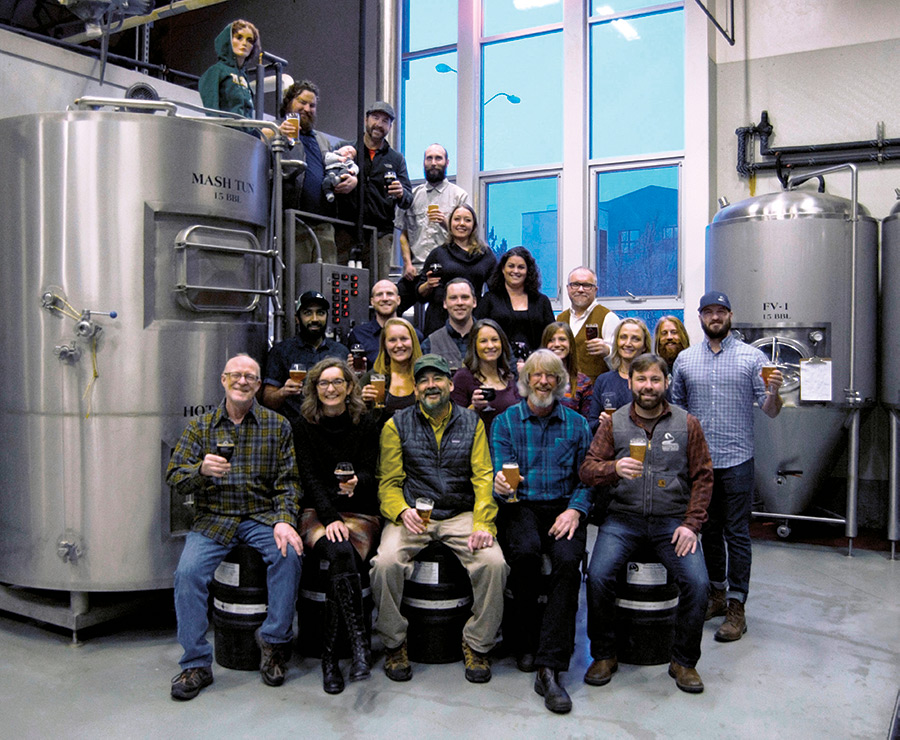 The Blackfoot taproom keeps a few of its standard brews always on tap, including the Scottish Ale, Cream Ale, and Blue Collar ESB (extra-special bitter). But most of the 45 taps rotate often, including seasonals, to keep the mix fresh.

The team also regularly brews small batches using a firkin — an English keg style that brews 10-gallon batches. The beer is naturally carbonated instead of being force carbonated with carbon dioxide, and is served on a traditional pump rather than with a gas blend. The firkin beer sells out quickly whenever it’s available.

Chisman and his team have become more experimental in recent years, brewing saisons and barrel-aged sours that take 18 months to age. The brewery recently tapped a cask of Black Currant Gose that sold out within a few hours.

“A lot of times those sours are barrel-fermented in old wine barrels,” Chisman says. “Those take about a year and a half to make. It’s a long time, but when they turn out the way you want, it’s delicious and fun. The customers love them.” 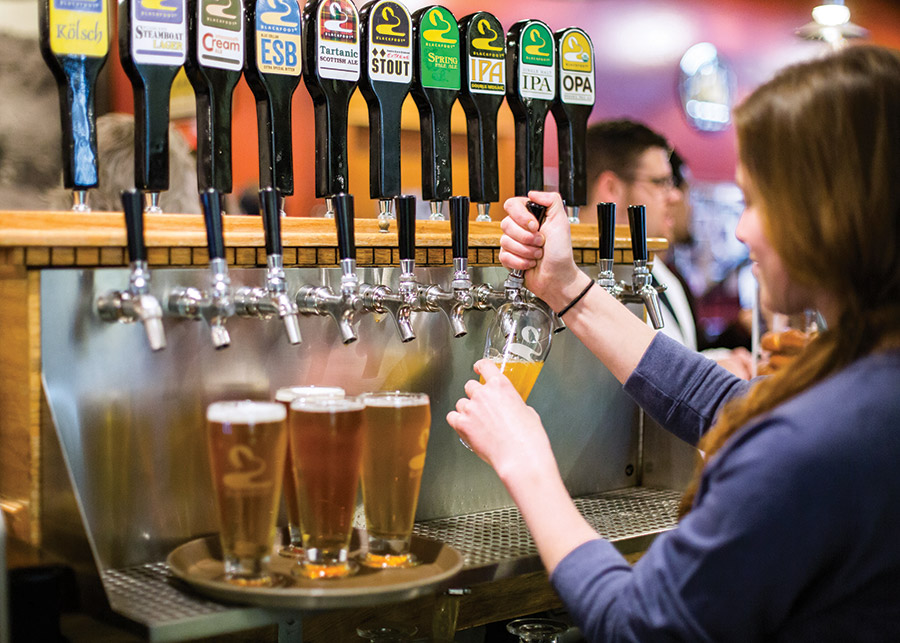 Smith is “semiretired” and spends less time these days working on day-to-day brewery operations. Wermers retired several years ago, and Simshaw retired in January. All three remain partners in the venture.

They didn’t have to look far to find the next generation of Blackfoot River Brewing stewards. They’d hired Flint as an office manager in 2009. Chisman, who had brewed elsewhere, signed on as Blackfoot’s head brewer in 2010.

“Being hired here put me into a healthy environment with great ownership, a dynamic team, and lots of opportunities,” Flint says. “But more importantly, I love being in a business where I’m really proud of what we produce. Here, you feel like a part of something bigger.”

Simshaw visits the brewery every Wednesday to meet up with some buddies from his days working for the state. The beer is good. The atmosphere agreeable. He sees that the operation is in good hands.

“It’s been great to be able to go into the brewery, now as a customer, and see it’s still running just as well as I’d want it to be,” Simshaw says.