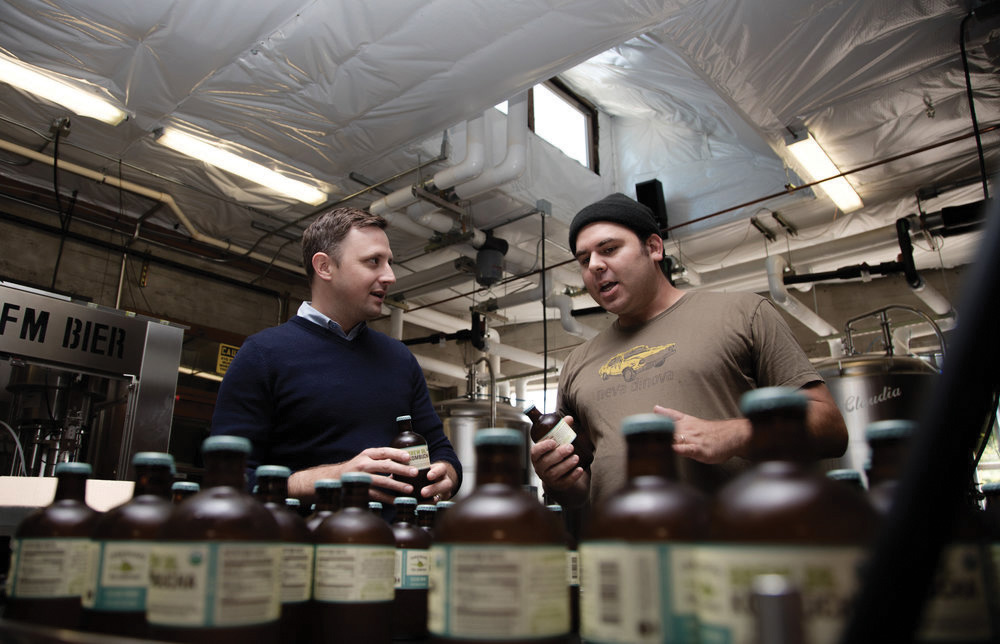 From tea to kombucha to spirits, Matt Thomas turned a single teahouse into a triple-threat beverage powerhouse.

In 2002, Thomas was studying business at the University of Oregon when he hatched a plan to open a teahouse. He created a business model to open a shop that would exclusively make and sell tea as part of a long-term project for one of his business classes.

He thought the model could work, and with no job lined up after graduation, he fell in love with the idea of kick-starting the venture. So, during his last week of classes, he asked his professor for advice — should he give it a try?

The answer was crushing.

“No,” the professor said.

Oregon was coffee country. To turn away from coffee shops — a proven business model — and open a teahouse where patrons couldn't order a cup of joe was doomed, he said.

So, Thomas shelved the plan…for a while.

“It was wise of him, I suppose, to be conservative in his advisement,” Thomas says. “He definitely scared me off the idea to the point where I took another job right out of school. But the itch was just too strong.”

Thomas opened his first teahouse, Townshend's Tea Company, the next year in the Alberta district of northeast Portland. Since then, he's opened eight additional teahouses, founded the third-largest kombucha producer in the world, Brew Dr. Kombucha, and spun off a small spirits business, Thomas & Sons Distillery.

But Thomas worked through some lean years before becoming the beverage magnate he is today. 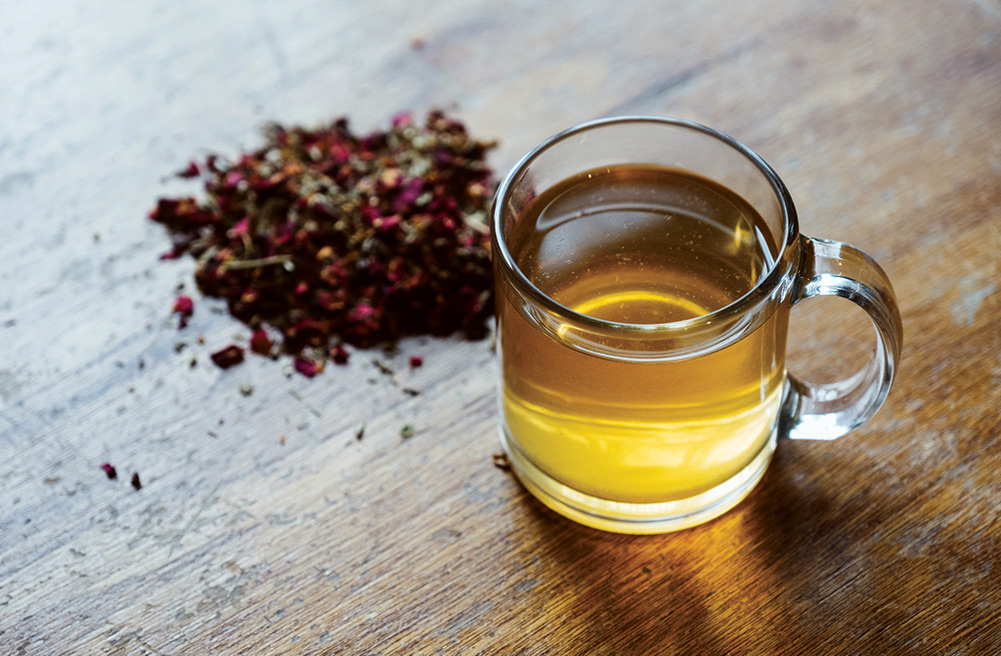 A Willingness To Explore

Thomas grew up in Keizer, 50 miles outside Portland, before the foodie and microbrew movement swept Oregon. His family was not wealthy. As a result, food was just for nourishment, not adventures. Thomas remembers cutting coupons each week.

In college, Thomas started dating a vegetarian — a foreign concept in his family — and experimenting with the bold flavors emerging in the Eugene food scene. Thomas credits that girlfriend, now his wife of 15 years, for bringing out his food curiosity.

“After growing up in a quiet, suburban setting with a family that just ate meat and potatoes, she certainly triggered a willingness to explore,” he says. 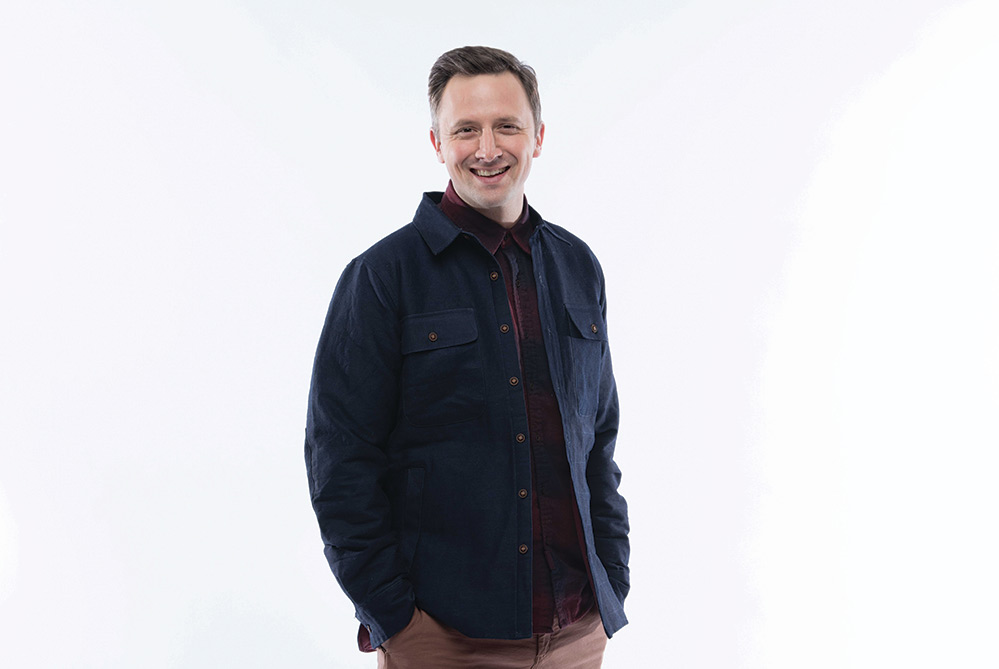 Plenty of others in Oregon were willing to explore, too.

The food and beverage industries were already blossoming when Thomas opened the first Townshend's Tea Company in Portland. Breweries and coffee shops seemed to spring up on every street corner both there and in Eugene, where Thomas opened his second teahouse. The Portland operation had some lean years, but was successful enough to prove the professor was wrong about tea businesses needing coffee to survive. 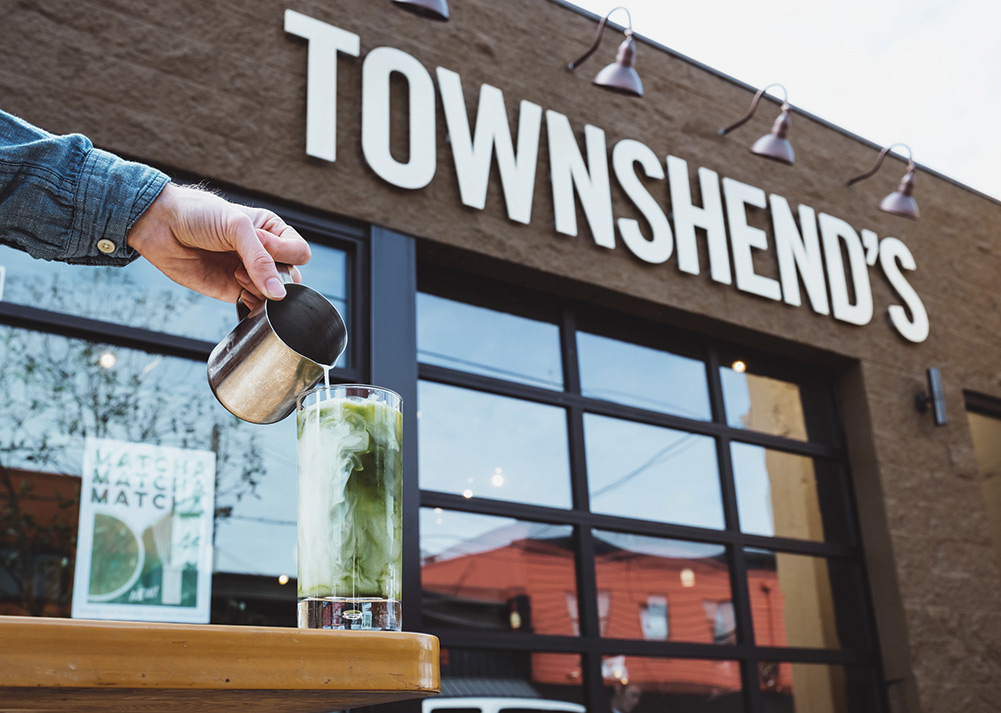 Trends were aligning for Thomas, who made and sold more than 100 tea varieties in-house. Patrons started asking for kombucha at the teahouses, so Thomas and his staff bought equipment and started brewing and selling by the glass. One enthusiastic kombucha customer happened to work for Whole Foods and arranged for Thomas to sell a small batch at the store.

That was Thomas' first foray into bottling. He remembers hand-clamping the lids on bottles and figuring out how to work the equipment to make the first Brew Dr. Kombucha labels. He delivered three or four cases himself before finding the receiving clerk in the back of the store to check in deliveries.

The small sale didn't bring in much money, but it opened an important door that eventually led to Thomas' products being sold in Whole Foods, Kroger, Trader Joe's, Costco, and other major retailers across North America. 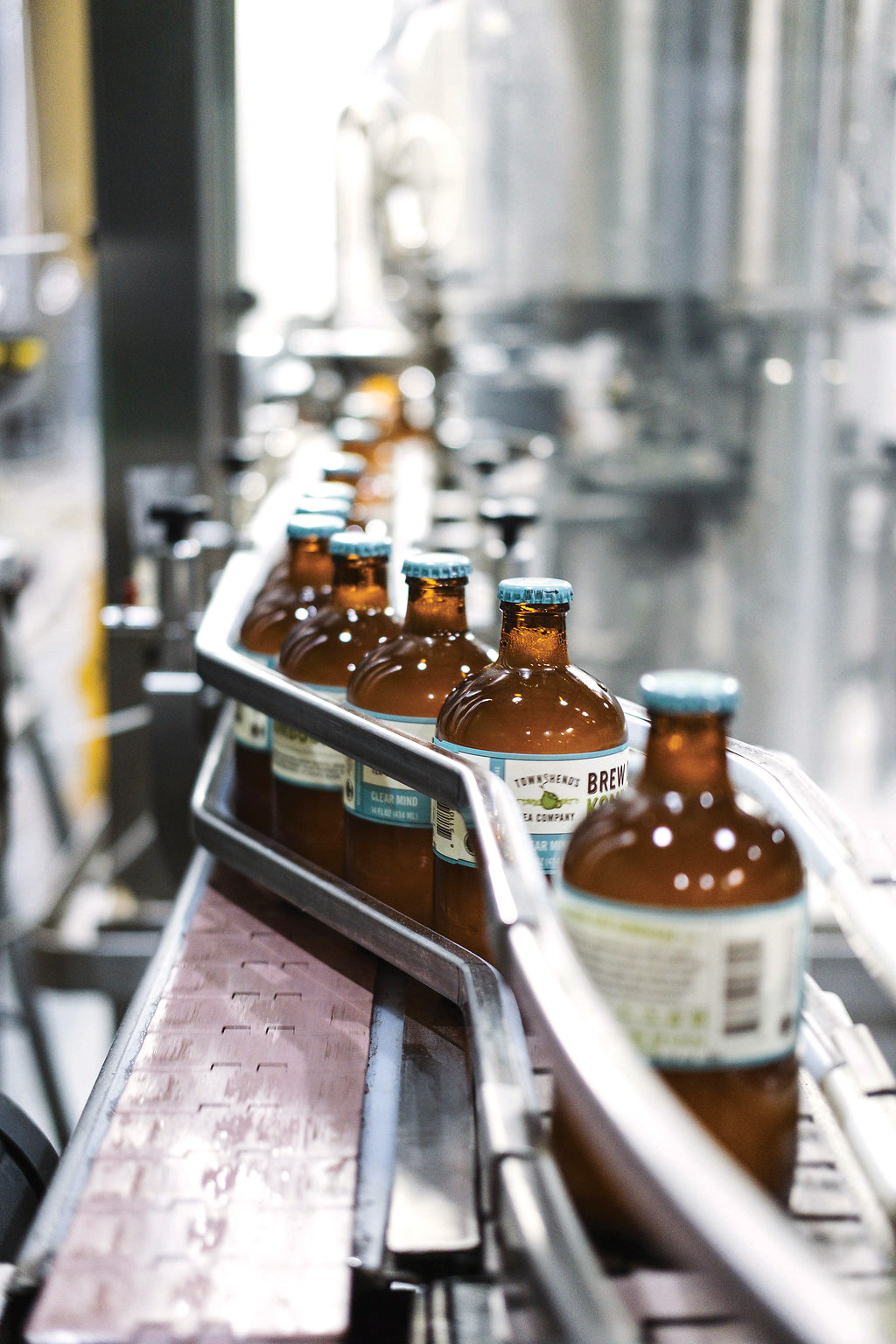 For Thomas, remembering that first delivery reminds him he's grown with his businesses, in part because he's had to work just about every job within them.

“I've had every job, from doing the manufacturing and being a janitor, to bookkeeping and being the field marketing guy who's handing out samples and doing sales,” he says. “I've worked 13-hour days behind the counter.”

The tea business continued growing and now has seven locations in Oregon as well as teahouses in Bozeman, Montana, and Park City, Utah. But Brew Dr. Kombucha has flourished even faster, enjoying roughly 100 percent growth or more each year as the label has expanded.

Other than taking small investments from friends and family members, Thomas never compromised his ownership stake by seeking money from investor groups. With that in mind, he received a business loan for $4.1 million from First Interstate Bank to support the larger brew house, and he's working with the bank to secure an additional $8 million this year for further expansion.

Some startup founders lack the managerial and operational skill set to lead a company bringing in tens of millions in revenue. Like most successful founders, Thomas learned as he went, tackling a new job before hiring for the position. He found himself flying to meetings all over the country, serving as a de facto plant manager after the expansion, and going through initial financial work with First Interstate.

“I've had to learn all of those processes,” he says. “Even plant design — including the way we moved product through our facility. It's not like we could pay a process engineer early on.” 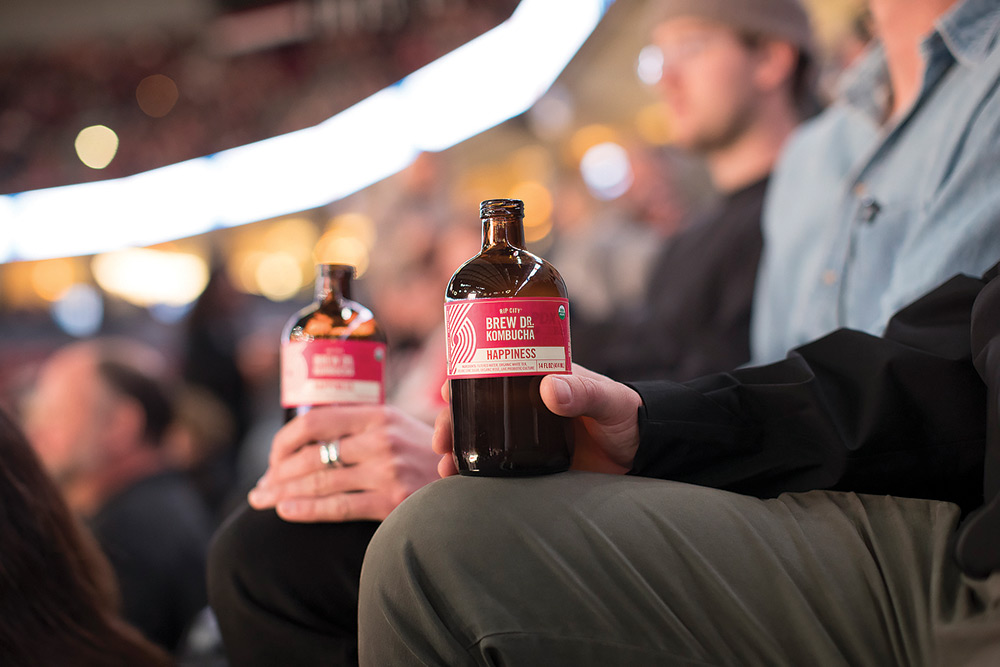 To make use of the alcohol extracted from his kombucha, Thomas founded a third company, Thomas & Sons Distillery. The distillery, also located in Portland, makes gin as well as an assortment of tea-flavored liqueurs under the name Townshend's Distillery.

Thomas never expected Townshend's Tea Company would lead down this road when he worked those long days at his first teahouse. But he also says he never would have launched a business if he didn't think it could have turned into something big.

“Being a neighborhood shopkeeper is its own noble path,” he says. “But as a 23-year-old fresh out of business school, I started a company because I thought it had an opportunity to be a big business. We're still working on that.”

Several years ago, an industry report estimated that only four percent of Americans knew that kombucha was available in local stores. Thomas thinks that number has climbed to six or eight percent today, meaning there's still plenty of potential kombucha converts. Even Thomas' mother is now an avid kombucha drinker.

“Kombucha will continue to grow,” Thomas says. “It's more interesting than fizzy water. It can replace soda at lunch or beer in the evening. Then there's the benefits of being a raw, fermented food. It's a drink for all occasions.”

Despite his success, Thomas says he's the same unassuming guy who started the first teahouse.

“I'm dealing with the same happy rigors of life as anybody else,” he says. “I definitely value that I can be my own boss. I've had success growing a company the way I wanted to. I feel very fulfilled and lucky to have the path I've had.” 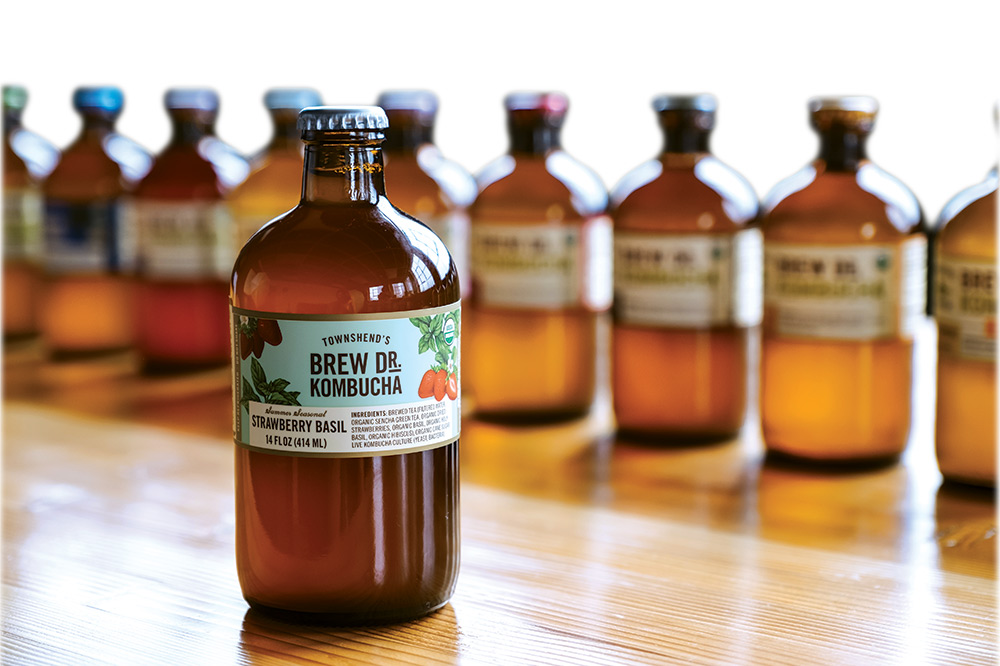 Kombucha is a style of fermented tea, which is partly why Townshend's Tea Company expanded into kombucha brewing. After being brewed and fermented similar to beer, kombucha is served cold and is lightly carbonated. Kombucha advocates say the drink aids digestive health and helps remove toxins from the body and serves as a healthier option for beer and soda drinkers.

Common kombucha flavors include ginger or combinations of fruits and spices. Some kombucha makers add fruit juice to flavor their brews. Brew Dr. Kombucha owner Matt Thomas says his company follows the traditional brewing method of fermenting tea, a process that takes about two months. He and other kombucha makers are concerned that companies will damage the perception of the product by making faster, cheaper, lower-quality beverages akin to soda and calling it kombucha.

“It takes months to properly ferment kombucha,” Thomas says. “There's value to all that work we're doing. We don't want that to be belittled in the eyes of the consumer because some new kombucha offering comes on the scene.”

Traditionally-brewed kombucha has an alcohol content between two and three percent, which is about half that of domestic lagers, but still too high to sell on the same grocery shelves as ginger ale or lemonade. To get around this, kombucha makers take steps to limit the alcohol content. Brew Dr. Kombucha does this through a distillation process that removes the alcohol without affecting the live cultures touted for their health benefits. 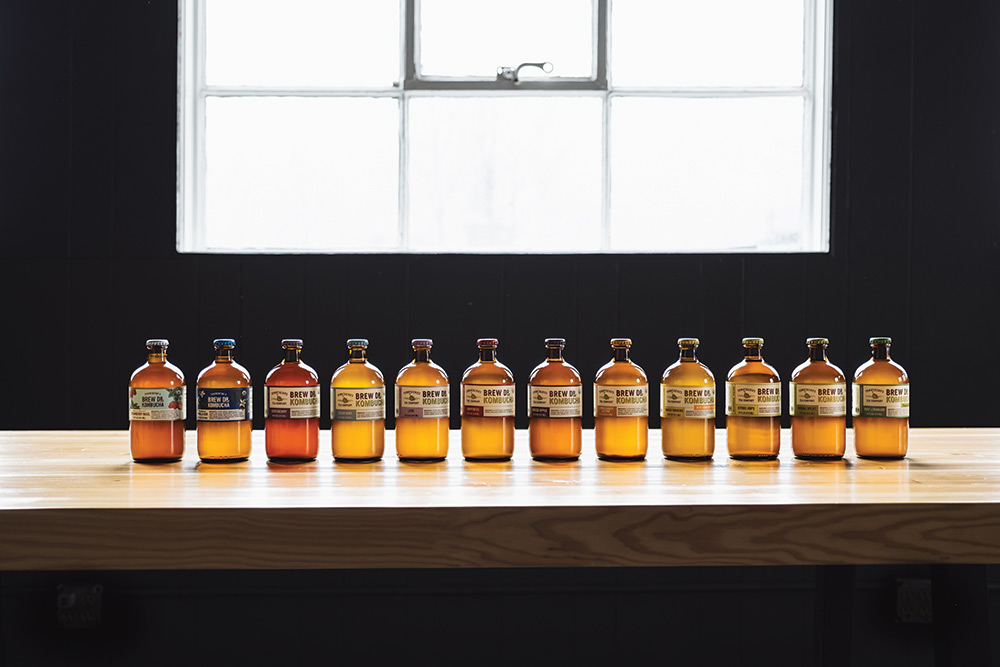