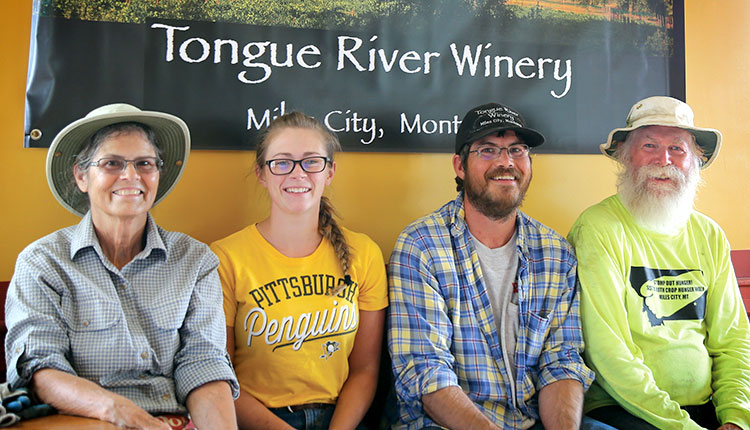 How Bob & Marilyn Thaden defied convention and reinvented themselves by opening the award-winning Tongue River Winery in eastern Montana.

There’s a stretch each winter during late February or early March when Bob Thaden walks the rows of Tongue River Winery to see how his vines fared during the frigid first quarter.

Bob scrapes the vines with his fingernail, or nicks them with pruning shears. After bad winters when cold snaps reach -20 or -30 degrees (which are fairly common in eastern Montana) these small incisions often reveal nothing but dark and dead material. Those vines must be replaced, then “retrained” for two years before they will bear fruit. But the rest of the time Bob’s excavation unveils verdant, green tissue peeking out at him, alive, well and waiting for the growing season.

Bob started growing fruit, including wine grapes, in Minnesota when he was just 18 years old. Now 69, he doesn’t need much to rekindle his love for growing things, even in the harsh Montana climate. But if he did, unearthing that phosphorescent green on the vine after a severe winter would do the trick.

“Springtime comes around, and that wonderful perfume of wildflowers and the pruned shrubs accosts your nose. Your heart melts all over again,” he says. “I smell and taste those things and think, ‘Mother Nature is the most seductive mistress.’ I will never stop loving her. But she can be a b****.”

You might not expect a former pastor to say such a thing, but Tongue River Winery, located in Miles City 144 miles east of Billings on I-94, is built on surprises. In fact, Bob and his wife Marilyn never planned on starting a winery at all, let alone in Miles City, where they are surrounded by cattle ranchers.

“Starting a winery in eastern Montana? How would somebody come up with that brilliant idea?” Marilyn says. “If somebody had told us 15 years ago we’d be doing this, we would have laughed in their faces.” 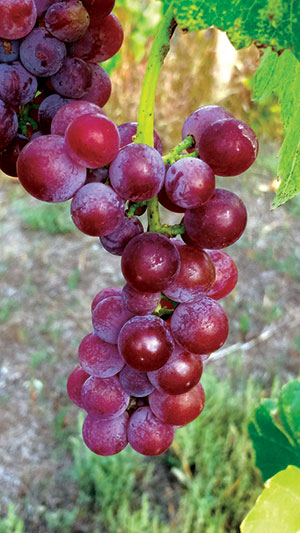 Bob and Marilyn met 52 years ago on the first day of class at Macalester College in Minnesota. The thought of opening a winery never crossed their minds then, nor was it a thought in the early 2000s when crisis engulfed the family. Marilyn was diagnosed with non-Hodgkin lymphoma. Meanwhile, the Thadens were preparing to take in both of their aging mothers, who needed caretaking. Their adult son started having epileptic seizures. Their daughter divorced.

Fearing the summer of 2001 might be their last together, the Thadens spent several months in Europe. When they came back to Miles City, Bob returned to work at the United Church of Christ, which had granted him a sabbatical. Bob loved his congregation. His faith remained strong. But three decades in the cloth were enough.

“It was like throwing a light switch,” he says. “I had this clear, unmistakable realization: ‘I just don’t want to do this anymore.’ That sort of triggering collection of events in my family’s life made it time to do something else.”

Bob considered coasting for another five years while his pension grew. After all, he’d delivered sermons for more than 30 years. Muscle memory could get him through a few more. But he quickly decided that wouldn’t be fair to himself or to the church, which deserved somebody bringing energy and excitement to the pulpit.

He needed to work up the courage to talk to Marilyn about his decision. She’d responded well to chemotherapy and returned to her speech therapy work, but the pair had their mothers to care for, and Bob hadn’t yet hatched a plan for a second career.

“How do I tell my wife that I want to quit my job, my salary and pension that’s building?” Bob says. “It took me a few weeks to work up the nerve.”

Marilyn’s response: “Quit! I can’t believe you stuck it out this long.”

Marilyn had always been the more cautious of the pair, Bob said. So she again surprised him when he somewhat sheepishly proposed adding 40 grape vines to the 60 he’d planted several years earlier as a hobbyist.

They harvested their first true vintage in 2007, planted more vines and opened Tongue River Winery in 2010.

Chardonnay, Merlot and other well-known European grape varieties aren’t hardy enough to survive the cold Montana winter. Bob had experimented with hardier varieties dating back to his early adulthood in the upper Midwest. He’s planted 30 varieties of hybrid vines cross-bred to maximize hardiness, most of them from the University of Minnesota and some capable of withstanding -50 degrees.

Some varieties struggled or died. Some grapes, such as the Marquette and Frontenac, thrived.

Bob tells hobbyist vintners that trial and error is critical to grape growing in cold regions.

“Growing perennials is like courtship,” he says. “You want to look around and dabble enough to know you’ll be satisfied with what you settle for or you might regret it for the rest of your life.”

The Thadens use another trick to maximize production: adding just about any other type of fruit to their blends. The winery’s most popular product remains a rhubarb wine. More unusual wines feature aronia berries, which are bluish berries related to chokeberries, and haskap, which are berries grown on a type of honeysuckle. 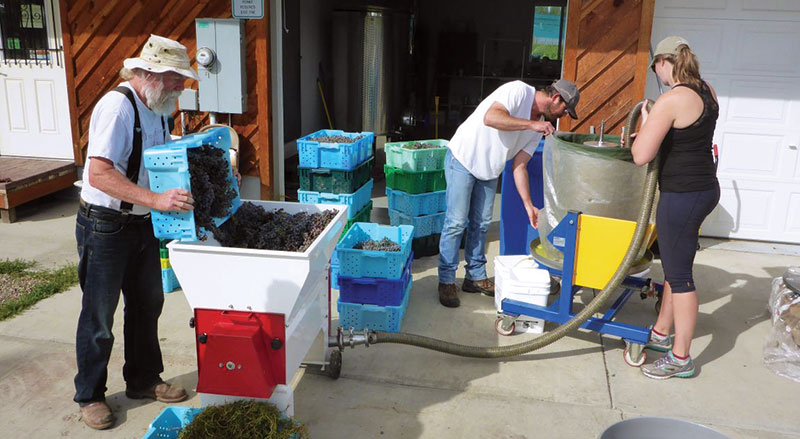 The Thaden’s 42-year-old son, Josh, started working for the winery in 2010. After five years, Bob saw that Josh was geared more for making wine than playing with plants. He asked Josh to become head winemaker, an offer his son chewed on for six months because he was unsure his father was serious. Josh eventually accepted, allowing Bob to focus on the vineyard.

“Josh has one of those minds that loves things that are measurable, reproducible and predictable, which is much more the case with wine than it is with plants,” Bob says. “I work with him, but he’s the shepherd who makes things happen. He owns the decisions. We like it that way.”

Marilyn beat her original cancer diagnosis, then a second, then a third. She now runs the tasting room, organizes events and tends to the mowing, gardening and other behind-the-scenes duties that keep the doors open.

“I like that sort of thing,” she says. “It’s a lot of work, but somebody has to do it, and I think it keeps me going.”

Tongue River wines have won more than two dozen awards since the Thadens opened shop, including the Granite Peak Award for the best Montana Wine for their White Raspberry, Brothers and LaCrescent wines.

The Tongue River Winery team now has a fourth member that might as well be family. Bob and Marilyn have been friends with Melodie Seymer for more than 40 years, dating back to one of Bob’s previous congregations in Wisconsin. She moved in with the family last summer and is learning how to grow plants and trees so she can one day take over that part of the operation.

Bob now grows grapes on 2.5 acres that produce between 1,200 and 1,500 gallons of wine most years, or around 6,000 or 8,000 bottles. While the Thadens invested between $30,000 and $40,000 of their savings into the operation, the family does all of its personal and business banking at First Interstate Bank’s Miles City branch.

“My wife and I have pensions,” Bob says. “We are debt-free. We don’t care if we make a penny as long as we pay our son’s salary. We are doing this because we love what we do, and that’s the best reason to do anything.”

Marilyn still enjoys working part-time as a speech pathologist, but both feel reinvigorated by the surprising, latest chapter in their lives.

They hope to live to be 95 “and then just drop dead together,” Bob says.

“That may or may not happen, but that’s our plan,” he says. “We hope our son enjoys what he’s doing. We hope to be physically strong enough to do this for another 15 or 20 years.” 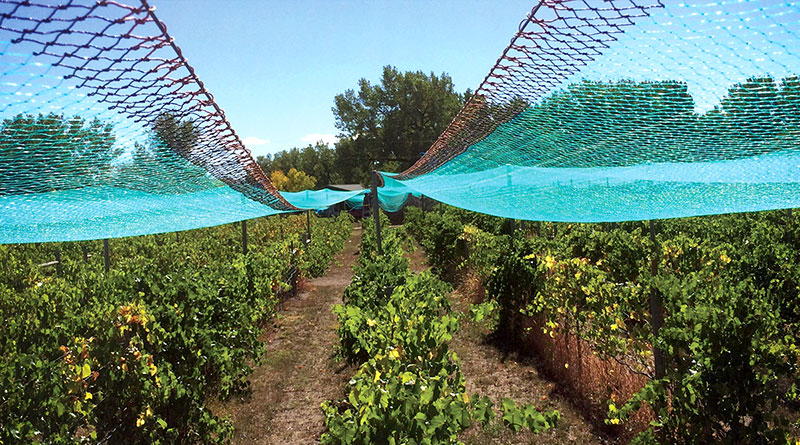 Bob Thaden never lost his faith even as he transitioned out of his work as a pastor at the United Church of Christ. But he said the nature of his faith — and especially his job as pastor —morphed over his three decades at the pulpit.

As time passed, he cared less about the particulars of a person’s belief system and more about how their convictions helped them be good people.

Thaden still delivers sermons occasionally and remains a man of faith. But he also fills his spiritual cup by spending long hours tending the grape vines and fruit trees at Tongue River Winery.

“One thinks they will always be satisfied at work, that their boss will never fire them, that their wife will always love them,” he says. “When it really gets down to it, one of the only certainties in life is that spring comes every year. Part of the joy I get is being a sort of co-creator with Mother Nature. I try to put myself in sync with what she demands.”

Protecting Your Car from the Elements

Planning to Buy This Spring? Get Ready Now!